Dogs, cats, humans and other animals sometimes have the ability to engage in remote sensing. It is through what I have termed the empathosphere that they are able to sense when a family member has had a serious accident or has died in hospital before anyone else is informed. They show evident distress at the time of the accident or death which is later confirmed. Human occurrences of such phenomena have a reportedly high frequency in twin siblings.

Empathosphere connectedness and associated sympathetic resonance may enable animals to locate their loved ones in places where they have never been before, such as a new home miles away from where they were living and either ran away during the moving process or were given to neighbors. A typical example is that of Bay, a mutt dog from St. Paul MN who knew when one of his beloved family members, the grandfather of the house, had died in hospital. Bay had kept a vigil by the old man’s chair, day and night, for five days, but quit and resumed his normal activities the morning the grandfather had passed on. During his vigil he took no food, and refused to go outside, being carried out to go to the bathroom. The recent account of the cat Oscar, the feline resident of a nursing home in Rhode Island who has predicted the passing on of 25 in-patients, jumping on to their beds and staying close during the in-patients’ release from terminal dementia. On the basis of Oscar’s behavior, the doctors and nurses know when one of their patients is dying… But as I detail in my two books Cat Body, Cat Mind and Dog Body, Dog Mind, cats and dogs do not have to be present to know when their loved one is dying or has passed on.

One journalist, playing devil’s advocate, asked me if all of this could be mere coincidence. She meant pure chance, because co-incidence is precisely the metaphysical dimension of these phenomena, for which I am unable to give a physiological explanation. Scientific understanding of brain function is still limited, but I believe that some quantum field phenomenon coupled by affection and empathy may be involved.

The mourning of elephants over the remains of their herd-mates has been well documented, and the most recent account of African elephants paying tribute to conservationist Lawrence Anthony. According to The Ark, Journal of Catholic Concern for Animals, (No.222, Autumn/Winter 2012) ”Two days after he died in March 2012, a herd of wild elephants, led by two matriarchs, arrived at his home, followed by separate wild herds—a total of 20 elephants in all, walking over 12 miles to get to his home. Lawrence’s widow, Francoise, was especially touched, knowing that the elephants had not been to his house prior to that day for well over a year. But yet they knew where they were going. They stayed there for two days and two nights.”

One of the most celebrated and phenomenal feats of empathic “Sixth-sense” finding of a loved one occurred during World War 1. It involved an Irish terrier named Prince journeying from England in late September after his master had been sent with his Battalion across the sea to Europe that August. Several weeks later eventually found his master in the trenches in Flanders, France. (For details see Neil R. Storey, Animals in the First World War, Shire publications U.K., 20014).

In his memoir Unspoken Messages: Spiritual lessons I Leaned from Horses and Other Earthbound Souls ( Balboa Press, Bloomington IN 2015) Army Vietnam veteran and retired Kentucky State Police officer Richard D. Rowland documents how stabled horses at his facility reacted all together at exactly the same time when the veterinarian euthanized a beloved mare, sight unseen from most of the other horses. The five people witnessing this were amazed that the horses all knew. This is affirmation of the existence created by connected consciousnesses of what I call the empathosphere. Rowlands describes this event as “Something spiritual, something older than time, some transfer of wisdom or spirit took place through the communication that we witnessed.”

In the U.S. the story of 7-year old Samoyed-husky mix dog named Zander hit the news media in early October, 2012. Somehow she was able to find her beloved master, John Dolan, suffering in the Good Samaritan Hospital in Islip, N.Y., a difficult two miles from her home that included crossing a stream, a highway and tricky navigation through neighborhood streets where she had never been before. Good Morning America reporter Avianne Tan posted the account on Feb 13th 2015 Sissy, an 11-year old miniature Schnauzer in Cedar Rapids, IAended up at Mercy Medical Center 20 blocks from her home where her co-owner Nancy Frank was recovering from cancer surgery. A surveillance camera in the hospital lobby caught the dog entering through the automatic doors and wandering around.

Husband Dale Frank finally got a call at 5:30 a.m. from a security officer who found his phone number and house address from her tag on her. Dale Franck’s daughter got permission to take Sissy up to Nancy Franck for a few minutes, he said. His theory about how Sissy might have gotten 20 blocks to his wife was that Sissy used to ride with him to pick up my wife from work next door to the hospital but they never walked that route before. 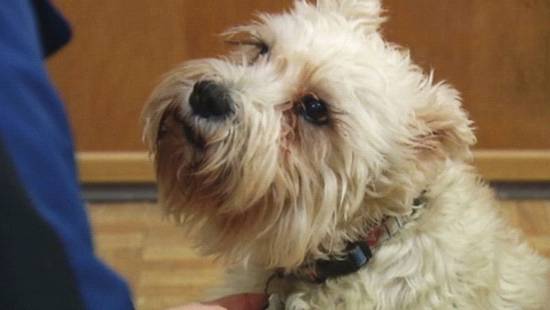 This dog gives additional evidence, as per the dog in New Jersey a couple years ago who visited his ailing human companion in hospital but had never been there before, in support of my theory that they can enter the empathosphere and navigate on the basis of emotional connectedness.

I have heard from many people whose companion animals have shown such remote sensing abilities, the most common being able to anticipate when a family member is coming home, not on a regular, conditioned learning basis but at irregular, unexpected times.

Louise Vajda of St Louis MO wrote to me about a remarkable dog named Shosty. She states:

“My husband’s parents lived in Indiana. My mother-in-law’s brother, John, lived with them. He was a diabetic. They had a dog named Shosty (short for Shostakovich, the Russian composer).

The brother John became ill and died. Immediately after the funeral, Shosty disappeared. Several days later a friend of the family found the dog, hungry and haggard, lying on John’s grave!

The remarkable and unbelievable part of this story is that the cemetery was many miles outside the city, and Shosty had never been there before. They had no idea how he had been able to find it.

I believe dogs have some special abilities of which we humans are unaware.”

After giving a talk in Minnesota about holistic care for companion animals, a woman came up from the audience after my seminar to share the amazing saga of her cat she had when she was a student many years ago. She left the beloved feline with her parents and moved seven miles across the city of Los Angeles into an apartment. Soon after, her parents told her the cat was gone, and to her surprise some days later she found the cat waiting for her outside her apartment where the cat had never ever been before. How the cat survived a journey across that city is a miracle of instinctual prowess in itself. But how the cat knew where to go we may never know. We do know that cats, like other animals, have micro-particles of iron in their brains that can help give them some geomagnetic compass-like directional sense, but whatever emotional sensors they must possess may forever remain part of the great mystery that leads some of us to a deeper faith that others fear or dismiss for lack of any rational explanation. Yet we live that mystery that should move us all to reverence all life, and celebrate the miracle of sentient life and conscious existence!

There are also accounts of people remotely sensing when a loved one is ill or injured, one notable instance involving a wolf who had established a close bond with two men. Nick Jans, in his book A Wolf Called Romeo. Boston/New York: Houghton Mifflin Harcourt, 2014, describes having a nightmare about a wild wolf living near Juno Alaska who had become friendly toward him and his dog and would meet regularly to play together. “I felt Romeo scream,” he said. “I could hear it inside my head. He was in agony. I saw him turn to bite at his side, and at that moment, I know he’d been shot.” The next day Romeo did not appear as usual to greet him and his dog Brittain. Over the next few days, a similar dream came to Vic Walker, a local veterinarian who had developed his own connection with the wolf. In his dream “Romeo was wounded…He’d been shot in the jaw. The bone was totally shattered. Harry was there. He said, ‘He’s done’; I told him, ‘No, no. I can fix this.” Later Romeo’s body was discovered. He had indeed been shot to death by two out-of-state hunters.

From an evolutionary perspective these powers of empathy would be survival-enhancing for highly social species, empathy being recently observed in rats in experimental studies of care-giving and rescuing behavior.

It is my professional opinion as a veterinarian and ethologist with over 50 years of experience working with animals that they can not only help heal us in many ways, they may actually take on some of our emotional stress and distress and suffer from diseases of empathy just as we humans sometimes do. This is a warning to us all, that we should enter the empathosphere with caution, being mindful of how the suffering of others may affect us, compassion fatigue being a common sign in many care-givers. The empathosphere may also be the realm where remote healing can occur, as through prayer, meditation or focused attention on the afflicted individual.

I do fear that as the Anthropocene Age advances we may lose our connections with reality through immersion in the virtual reality, digital economy and social and entertainment media of the internet cybersphere, becoming a terminal species of techno-addiction and illusory control, disconnected from the empathosphere and the biosphere that sustains us in body, mind and soul, all being in urgent need of repair. Yet with right mindfulness the cybersphere could, when linked with the empathosphere and the core principles of global bioethics, become what Pierre Teilhard de Chardin called the noosphere. Already the noosphere concept is becoming a reality to harmonize business interests with sustainable planetary stewardship and global monitoring of interdependent social, ecological, economic and industrial systems. (For details see Noosphere - Wikipedia https://en.wikipedia.org/wiki/Noosphere).