Conflicts on every continent are increasing in these times of rising populations, migration, poverty, hunger and more violent confrontations between factions of different religious and secular beliefs and traditions. India is no exception, but in this instance there are tragic consequences for animals, cows in particular. Cows and their offspring are held sacred by the ruling Hindu majority now caught in a double bind that can only be resolved by accepting the tragedy of reality and putting compassion into action.

India has over 30 per cent of the world’s cattle population estimated at 305 million, a population contributing significantly to climate change. It is also the world’s largest exporter of beef second only to Brazil. In 2016, India’s dairy exports were valued at 172 million USD, which was up five percent in comparison to the previous year.

The consumption of beef and veal is forbidden for practicing Hindus and Jains who operate many cow shelters. According to the March 14th 2019 BBC TV news documentary India’s Cow Vigilantes. Muslims and low caste Hindus (Dalits) who are transporting cattle to slaughter— mainly spent, dry cows, worn-out working bullocks and unwanted bull calves— are being attacked, 46 of whom have been killed in Rajasthan. Such violence in the name of cow protection has been sporadic for decades but is now escalating with rising human and cattle populations.

Slaughtering cattle was made illegal in all states except Kerala and West Bengal at the end of British rule that pressed for regional slaughter. So now millions of these gentle cattle, many well- loved family cows and hard-working bullocks who once pulled carts and ploughs are sent by road, rail and on bleeding hooves as we have witnessed, across the continent to these locations. Many die in transit. 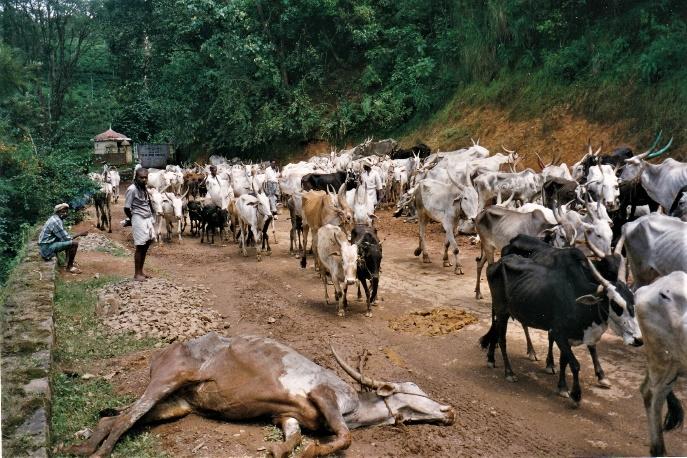 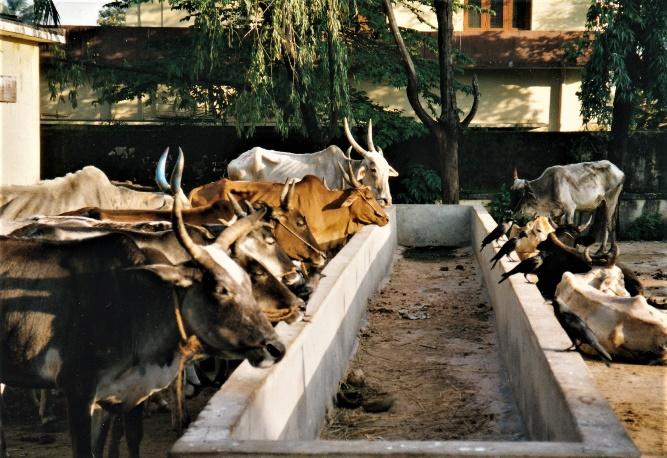 Pregnant cow collapsed on forced march to legal slaughter in Kerala and those who survive are given no water as they wait to be killed by ritual slaughter.

Other cattle who are no longer of productive value and only worth their hides, blood and bones go to local cow shelters. These are now rapidly filling up where exhausted and often sick and injured animals are further stressed by lack of feed, adequate space, shelter and proper veterinary care. Euthanasia is forbidden because it violates the Hindu doctrine of ahimsa (non-harming) which is believed to make the perpetrator spiritually impure. We have visited several such shelters (ghousalas) and can attest to the wholly unacceptable condition of both the animals and how they were being cared for in many instances. The same is true for the legal slaughter houses we visited.

The BBC reported the Indian government is providing more feed for the thousands of confiscated cattle “saved” from slaughter by Cow Protection vigilantes while the meat-deprived Muslims and Dalits cannot afford sufficient feed for their own milk cows. Many of these cows must forage garbage piles and wander the streets in search of food, often dying slowly and agonizingly from internal impaction by the many kilograms of plastic bags they consumed and thought were food; and by vehicular traffic, occasionally being clubbed for stealing from market stalls. Hundreds of thousands of “scrub” cattle graze in wildlife preserves across India along with sheep and goats which wild predators, from jackals and wild dogs to tigers and leopards kill as their main source of food. So there is retaliatory shooting, snaring and poisoning by owners whose animals degrade habitat and spread foot and mouth and other diseases to indigenous herbivores from elephants to Spotted deer and Guar. 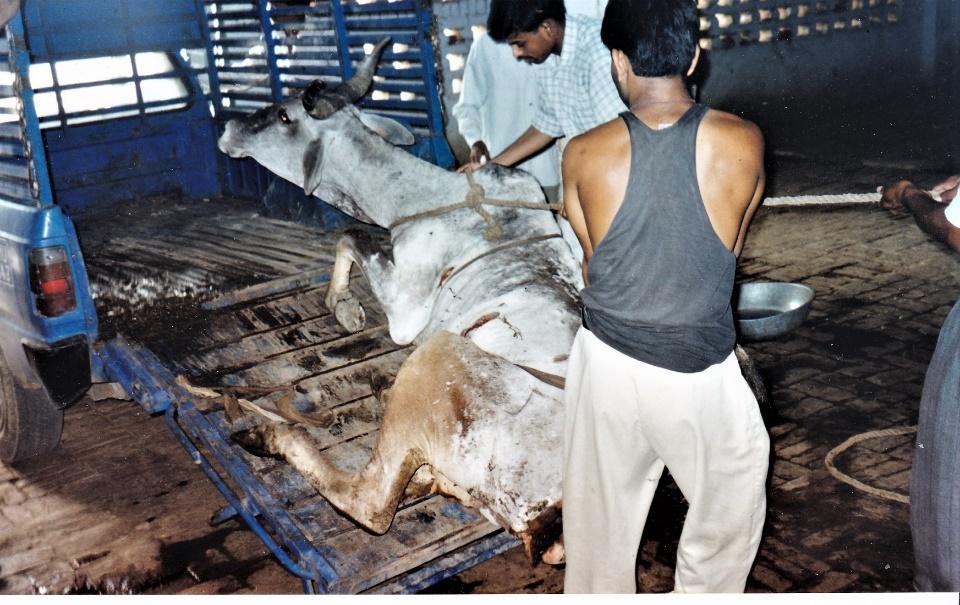 “Rescued” cow with broken leg, hit by vehicle, being mishandled en- route to die slowly in a shelter

The ecologically and economically sensible way of disposing of non-productive cattle and recycling blood and bones into fertilizer, hides for the leather trade and meat to feed millions of non-vegetarian people has been long practiced and accepted democratically in this once pluralistic society.

To see these beautiful and gentle animals become the victims of religious politics is a travesty of our humanity, of compassionate action that calls for more Hindus and Jains to become vegan or at least need fewer milk cows and replace bigotry with benevolence toward our own kind and all creatures great and small. Surely it is more compassionate to end animals’ lives with a quick, humane death than to allow them to waste away in ever more crowded cow shelters; or to have them travel days and nights under the most inhumane conditions being force-marched or crushed in overcrowded trucks and railroad cars. to where they can be slaughtered legally. According to the Indian veterinarian, a Hindu whose work we support (name withheld for his own security, personal communication, March 23, 2019) “Humane slaughter is highly preferable and must be practiced, Changing food habits by enforcing law is unacceptable and will jeopardize the very secular nature of the country constituted as a “Sovereign Socialist Secular Democratic Republic with unity in diversity.”

Now the nationalistic Hindu government must face reality since the reported response so far has been police indifference and even participation in Hindu extremist Cow Protectionist violence. The rule of law must prevail in any secular society and the Hindu and Jain doctrine of ahimsa, (non-harming) be applied to all, giving full redress to all who have been harmed, including the families of those killed. If eating beef or euthanizing a suffering cow violates ahimsa, then why is it no less a violation to take the milk from cows and turn their bull calves into beasts of burden, all to suffer when fates often worse than death when they are no longer productive? 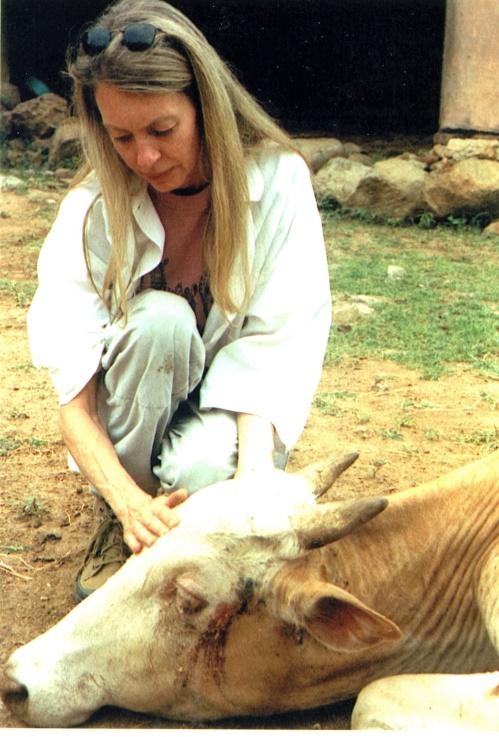 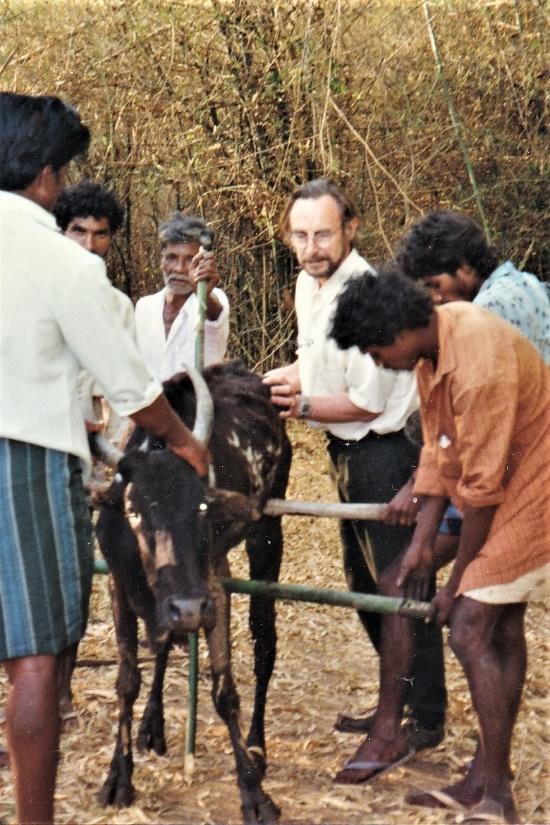 Co-author Krantz at her animal refuge in India attends to a bullock blinded in one eye by a vegetable stall vendor. Co-author Fox rescues starving bullock kept to produce manure for illegal sale as fertilizer then be sold for skin and bone, one of hundreds of thousands infesting wildlife preserves across India

There will never be enough shelters to hold them for the rest of their lives if current levels of milk consumption and exports continue and local, hygienic and humane slaughter remains unlawful. In the name of ahimsa, humane slaughter should be made legal in all states if India’s claim to be the world’s largest democracy that regards its cows as sacred is to be believed. The cow should not become a victim of religious politics fomenting prejudice, hatred and violence. This scenario surely signals we must all begin to shelve our differences and cross the great divide and come together to find ways to improve the quality of life on Earth for all beings, human and non-human.

Krantz and Fox are authors of the book India’s Animals: Helping the Sacred and the Suffering. www.drfoxonehealth.com for more details. 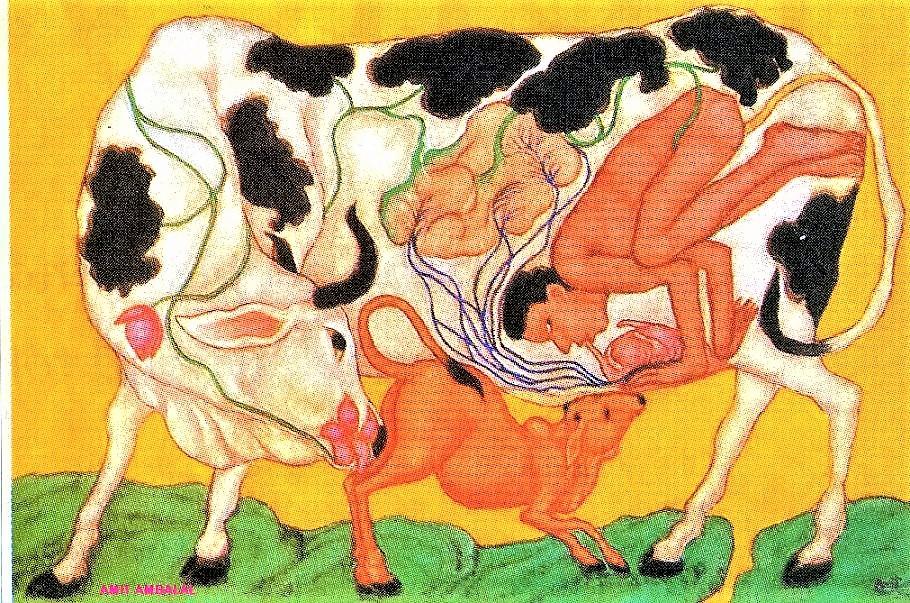