The Light of Compassion

The light of consciousness and the light of every living being are synonymous in the minds of many who are on the spiritual path of enlightenment and who are familiar with the sacred scriptures of Hinduism. In the Taittiriya Upanishad, for example, it is written:

“May the light of sacred knowledge illumine us, and may we attain the glory of wisdom.” (1.3)

But there is also the light of love and compassion, as implied in the Chandogya Upanishad:

The three central themes of the Bhagavad Gita are jnana, bhakti and karma (Light, Love and Life). In Buddhism we also find reference to the Light as a reflection of Buddha-nature, and also in Christianity, the haloes of Saints being the radiance of divine nature.

The 13th century Sufi poet Jalalu l-Din Rumi advised: “If you keep your gaze fixed upon the Light, you will be delivered from dualism and the plurality of the finite body.” In more recent times, Martin Luther King wrote: “Every man must decide whether he will walk in the light of creative altruism or the darkness of destructive selfishness.”

Light, enlightenment, wisdom and compassion are interwoven phenomena and concepts evident in the world’s major religions that are linked with divine revelation and presence.

As a scientist, I have always had a healthy skepticism and curiosity about the phenomenology of ‘the Light’. Reported studies of auras, Kirlian photography, and other approaches taken by the material sciences to quantify what others believe to be non-material, spiritual or purely subjective, do little to prove, disprove or enhance our understanding of the Light.

A few years before I was witness to the Light in India in association with animals, I was sent a photograph of a Tibetan Buddhist monk blessing the animals. Along with this photograph came the following explanation:

In July 1985 the first Phowa course by the Ven. K.C. Ayang Rinpoche was held in Tokyo, Japan. After the course Rinpoche made a short visit to holy places in Kyoto and Nara, the ancient capitals of Japan. On the 26th July a photo was taken of Rinpoche with some deer in Nara Park. When the photo was developed a clear rainbow appeared on the print. Many people have asked about the photo and this is the background to it.

On that day many photos were taken in the park but I clearly remember taking this one as Rinpoche went and sat with the deer and said, “Take a photo now”. This was the only time that he had asked for a photo to be taken.

At the time the photo was taken no rainbow was visible and there was no rain. It was a clear, sunny afternoon and none of the other photos had any rainbows or light effects although all were taken under the same light conditions within a short space of time.

It is also interesting that the place where the photo was taken, Nara Park, is considered to be sacred ground and the meeting point of several ‘lay lines’ (lines of energy in the earth that seem to be linked with the location of major holy sites and buildings). This park contains three of Japan’s most revered shrines and temples including Todaiji, an important Buddhist temple famous for its huge statue of the Buddha Vairocana.

Rinpoche believes the real presence of the Buddha Amitabha is with this photo and has said, “I am praying that whoever keeps this photo with strong confidence and devotion will become inseparable with the Buddha Amitabha’s mercy and compassion.” (Jackie Young, The Rainbow Photograph of the Ven. K.C. Ayang Rinpoche) (SEE PHOTO BELOW).

With no intent to emulation, though I was deeply moved by the vision of the rainbow that is the spectral vision of the Buddha-light of divine presence, I was no less touched by some of the photographs of my humble self, enjoying the blessings of communion with a water buffalo, the emissaries from a herd of donkeys, and a billy-goat. These, and a total of some 200 animal souls, enjoyed the sanctuary of my wife Deanna Krantz’s Animal Refuge in the Nilgiris, S. India. This peaceable kingdom was a creation of loving compassion and years of dedicated hard work under inconceivably difficult circumstances. The light of India does not shine very bright for her animals. In these photographs I saw what I felt at the time: a golden light, sometimes with a whitish haze, almost dazzling, yet tender, around the animals. I recalled seeing at times the entire Animal Refuge and staff suffused in this light that was omnipresent and intensified just before dusk—when top dog Dean would have me meditate.

I knew that it was for real. I had seen it go out after Deanna and some ninety animals were forced out from a defunct animal shelter that she had been invited to restore – but was not expected to confront the maya realm of endemic animal suffering, cruelty, corruption and wildlife decimation in the surrounding jungle, which of course she did, and got into much trouble for her good labors.

I realized that the Light had gone when I went back to the defunct sanctuary to pick up a few remaining items after Deanna and most of the animals had been forced out. I was so surprised that I got out of the jeep to look. The sky was clear and sunny, but all the vegetation, the earth, and the buildings had turned almost gray; everything seemed flat, tired, lacking in radiance and vitality. Most of the birds had already left to relocate to her new refuge just across the little river no more than 300 yards away, where there was food, water and sanctuary for all.

I remembered, as I stood there in disbelief in this dispirited place, that I had seen the same loss of light in the captive elephants in American zoos and circuses, and also at a nearby Elephant camp. Compared to those in the wild who roamed nearby, it was quite apparent that these poor elephants had lost their radiance and vitality. Clearly my senses had revealed to me a phenomenon about which I had had no prior intimation as either part of my education or culture. The consequences of compassionate care are indeed profound, teaching me another way of seeing, if not another dimension of life. I will be forever grateful for the happy and secure creatures at Deanna’s refuge who embraced me in the Light, and of course to her.

Acceptance comes before interpretation and understanding.

I was sorting through all my animal and environment-related files recently and I came across a cluster of saved correspondence from readers of my &“Animal Doctor” newspaper column, syndicated across North America, who say, felt and otherwise experienced the physical presence of a deceased animal companion. I was surprised and impressed by the number of readers,(whose input about their animals I have appreciated for some 40 years and more!) who affirmed that there are other dimensions to the various and separate realities we create with our culturally shaped and conditioned states of mind.

One of the most vivid accounts (included in my book Cat Body, Cat Mind) was from a couple who both saw their deceased cat enter their living room in a halo of light after previously filling the artists’ studio with an indescribably sublime fragrance. I have had personal accounts of people dying and giving off that kind of fragrance; and even a major newspaper reporter seeing the ephemeral shape of his beloved dog arise from his canine companion during the chemical-injection initiated euthanasia process.

How are these kinds of visionary experiences properly interpreted? Are they hallucinations, self-comforting imaginative creations, conditioned associative memories awakened by grief and remorse, or glimpses of the quantum field of love (which I term the empathosphere) and life after life? I envision this as part of the boundless connectivity of a creative life-force from which the code of life, genetically and ethically manifested in our consciousness, we express as the light of compassionate action, loving kindness (maitri) and obedience to the Golden Rule.

Sometimes a camera will catch the images which our rational minds of such experiences would deny: Like the rainbow that appeared when a Tibetan monk was blessing some deer in a park in Japan. My rendition of a vision that I experienced in the ancient St Oran&’s Chapel close to the abbey on the Isle of Iona on the west coast of Scotland invokes a sense of the numinous for some, an affirmation that this world is but one reality of which there are many dimensions, including the manifestations of our loved ones, human and non-human, after their mortal existence has come to its end. So soon will ours.

These kinds of phenomena, and the visionary experiences described over the ages by people of various religious traditions and beliefs as well as secular non-believers who have had transcendental, metaphysical/spiritual experiences in times of grief and other emotional crises, during prayer and meditation, or ecstatic communion, often in Nature beside a waterfall, ancient tree or upon seeing a wild creature—integral and culturally accepted elements of the Vision Quest of Native Americans, —cannot be denied: Except perhaps by the instrumental rationalism of the dominant culture of materialism/mammonism that is destroying the Soul of the Earth and all our sacred connections to the life and beauty within us and around us.

I would appreciate responses from readers after viewing the two images posted below (email me at animaldocfox@gmail.com). I feel that these metaphysical/mystical dimensions are significant in these difficult times of escalating religious and political conflict, ecological desecration and suffering, not as an escape but as an affirmation that we are part of one stupendous whole and that there is a deeper, spiritual dimension to all our lives which we must not abandon and become extinct by losing our humanity, or succumb to chauvinism and materialism, and instead evolve spiritually and ethically as a more empathic and enlightened species. 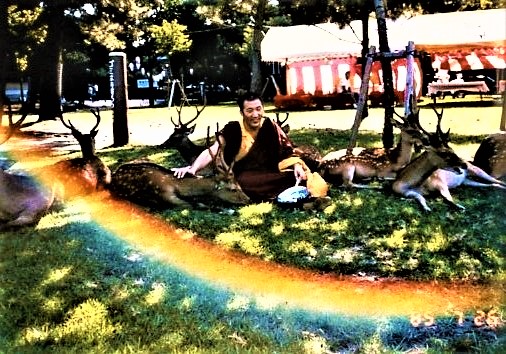 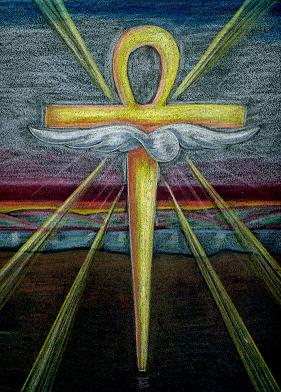 Vision on the Isle of Iona in St Oran’s Chapel, July 1958